The Two-Handed Swordsman is an infantry unit in Age of Empires II that can be trained at the Barracks once the Imperial Age is reached. It is the fourth tier upgrade of the Militia line.

Two-Handed Swordsmen are available to all civilizations except for the Persians.

There really is not much to elaborate about the Two-Handed Swordsman as performance-wise it is very similar to its predecessor; despite the substantial improvements to stats it is not that big of a step up, and the same general strategies still apply.

The Malay case is particularly interesting as one of their unique technologies is Forced Levy which changes the gold cost of the Militia line to food cost, including the Two-Handed Swordsman, making a swarm of these units a viable tactic in late game 'trash wars' where they easily defeat other trash units (Halberdiers, Hussars, and Elite Skirmishers).

Bulgarians also have quite effective Two-Handed Swordsmen, as they get all the Militia-line upgrades for free and receive an additional +5 melee armor if Bagains is researched, giving them an advantage in early Imperial Age.

"As armor improved, so did weapons. The two-handed sword was an innovation that allowed a man to swing with the power of both arms, not just one. This was a long and heavy sword, and it required a strong and well-trained man. The two-handed swordsman was a formidable adversary in hand-to-hand combat. Two-handed swordsmen used no shield and relied on the power of their attack to overcome an opponent's shield and armor. Although he struck fewer times, each swing had the potential of being a mortal blow, regardless of the armor and weapons of the defender."

The Militia line, with the Two-Handed Swordsman second from the right.

The Militia line, with the Two-Handed Swordsman second from the right, in the Definitive Edition. 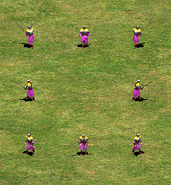 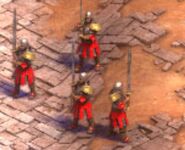 A group of Two-Handed Swordsmen in the Definitive Edition 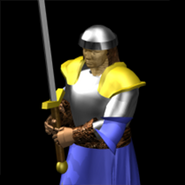 A render of the Two Handed Swordsman model
Add a photo to this gallery
Retrieved from "https://ageofempires.fandom.com/wiki/Two-Handed_Swordsman?oldid=280204"
Community content is available under CC-BY-SA unless otherwise noted.