The Turtle Ship is basically a stronger but slower and less ranged Cannon Galleon that can be trained in the Castle Age. It is one of the major Korean advantages. A single Turtle Ship can wipe out a small fleet of enemy vessels.

This means that the best choice against Turtle Ships is probably to mass Galleons, since they are cheaper, faster, and long-ranged, allowing them to utilize hit-and-run tactics. Bombard Cannons and Monks from inland are also good choices against Turtle Ships. Demolition Ships can also deal a lot of damage to mass Turtle Ships, but are not a suitable counter for small numbers of Turtle Ships.

The original Turtle Ship appearance (before version 1.0b) 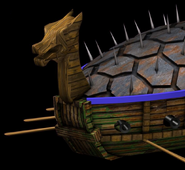 A Turtle Ship painting in the 16th century

Turtle Ship in the HD Edition and Definitive Edition
Español
Community content is available under CC-BY-SA unless otherwise noted.
Advertisement