Age of Empires Series Wiki
Register
Don't have an account?
Sign In
Advertisement
in: Atlantean units, Classical Age, Age of Mythology,
and 6 more

12 feet
The Turma is an Atlantean cavalry archer available in the Classical Age. They are only good against other archers. Turmae are similar to Egyptian Slingers, but are stronger, more expensive and more mobile.

Turmae make excellent raiders because their attributes make them very resistant to ranged attacks, and they can defeat most archers easily. They also have a strong bonus against Throwing Axemen, but it is mitigated to some extent by their low hack armor, which makes anything other than true archers very dangerous, especially cavalry that can outrun them. In the Classical Age they are also important as they are the only way for the Atlanteans to counter archers in that age. Unlike the Norse and Greeks they cannot train true cavalry until the Heroic Age, thus Turmae fulfill the anti-archer role for the Classical Age but are essentially obsolete or relegated to a support role by the Heroic Age.

The swift, front-armored Atlantean Turma is exceptionally good against archers such as the Toxotes and Arcus, but is weak against all other units.

The training of the Atlantean Turma was very focused and dangerous, requiring years to perfect. Both horse and rider had to be athletic, tough, and fast. A veteran Turma could kill a bird in flight with a well-aimed javelin throw. The horses, descended from wild Atlantean stock, were no less exceptional. These horses were so prized that capturing even one from the Atlanteans in battle was considered great good fortune - even if the battle was lost. Many great bloodlines were founded in other regions by such captured Atlantean stock.

Like all Atlantean human units, a Turma can be converted into a Hero at any time, provided the player has sufficient resources. 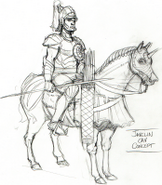 Concept art of the Turma 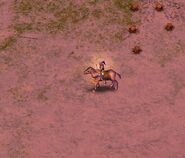 Wikipedia has an article about:
Turma
Community content is available under CC-BY-SA unless otherwise noted.
Advertisement