The Tupi Blackwood Archer is a ranged infantry native warrior in Age of Empires III that can be trained at a Trading Post built on a Tupi settlement.

They also inflict superior melee damage than most archer type units (same melee damage as an Iron Troop) and cost only slightly more than a Crossbowman. 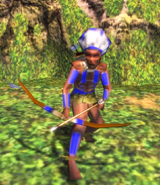