Trolls in legend and literature come in various shapes and sizes, but they are usually unsightly and pathologically afraid of sunlight, which turns them to stone. In Age of Mythology, they are suitably ugly, rock-throwing Classical Age Norse myth units available to worshipers of Forseti.

Regenerates hit points equal to the damage it does to enemy units.

Trolls are essentially slow but powerful archers, and should be used in a support role rather than in the front line. Their regeneration special ability helps them in this role as it gives them the chance of surviving prolonged battles. Trolls are especially powerful against infantry and have a high bonus against other myth units. However, they will fall quickly under a concentrated attack and will not last long when on the front line. Trolls can be easily countered by heroes, especially those with ranged attacks.

Trolls are dim-witted, man-eating creatures that live in caverns beneath hills and mountains. They are allies of the giants, and will fight against the gods during Ragnarok. Trolls are strong, and have long lifespans, but are not known for their beauty. Trolls could be turned to stone if exposed to daylight. Some are known to steal women and children, and might leave a changeling in exchange for a kidnapped child. Some trolls had magical powers, particularly divination of the future. 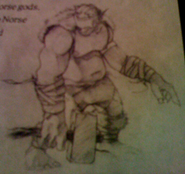 Troll concept art
Add a photo to this gallery
Retrieved from "https://ageofempires.fandom.com/wiki/Troll?oldid=275908"
Community content is available under CC-BY-SA unless otherwise noted.