Trees are the only natural resource that provides wood in the Age of Empires series, and are often grouped together in large clumps, making a forest. Trees are usually abundant throughout the map and are considered as one of the most common resources in the game.

Due to their abundance, trees can often be utilized as a shield from military invasions unless the enemy performs slash and burn techniques or mows it down with heavy siege weaponry, such as Siege Onagers.

Although trees are the easiest resource to gather, the small amount of wood it generates makes smaller maps susceptible to deforestation over time. This will make them rarer than food or gold since there is no other way to obtain wood apart from trading at the Market.

Depending on the type of map chosen for each game, different types of trees are available.

Regular trees in Age of Empires yield 75 wood per unit while Forest Trees yield 40 wood per unit. All trees have 25 hit points which must be eliminated in order to harvest wood. They are revealed in the mini map in dark green color which is adopted in the later games. There are five different kinds of trees each corresponding to different types of terrain: Palm Trees are found in the desert, Pine Trees and Forest Trees appear on grassy terrain, and Beech Trees and lone Oak Trees can be found close to coasts, or away from clumped forests.

~23
In Age of Empires II, ordinary trees yield 125 wood per unit whereas forest trees yield 100 wood per unit. There are ten different kinds of trees each corresponding to different types of terrain. Besides a more accurate size rendition, trees in the second installment have an additional form on snow. They are also easier to chop, having only 20 hit points and taking bonus damage from Villagers which means two chops (one after researching Sappers) are enough to fell a tree. Siege Onagers have the ability to instantly attack specified areas on the ground and cut down trees, making them extremely useful in creating a path to somewhere that would otherwise be blocked by trees.

Apart from Villagers, the following units can remove trees by attacking them, however the wood is lost in this case:

If destroyed by the units above or if all wood from a tree has been gathered, buildings can be placed on the tile. For trees placed as single objects (as opposed to trees placed automatically as part of forest terrain), it is enough to just fell them.

In the mini map in Age of Mythology, trees are shown as dark green in color. All non-Gaia forest trees contain 150 wood.

In Age of Empires III, trees are found throughout the map and are shown in the mini map as dark green in color. The types of trees in the game depends on the map chosen for each game. The wide variety of maps in Age of Empires III makes the game have the most diverse natural setting in the series, ranging from cold tundras to the desert of the southwest. Each tree has 6 hit points and yields 300 wood. 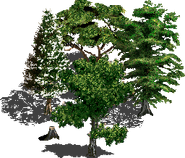 A Villager cutting down a tree in Age of Empires II: Definitive Edition.

A Siege Onager knocking down trees.
Add a photo to this gallery

Retrieved from "https://ageofempires.fandom.com/wiki/Tree?oldid=304525"
Community content is available under CC-BY-SA unless otherwise noted.