80% against buildings
15% against units

The Trebuchet is a long-range siege unit in Age of Empires II that can be trained at the Castle once the Imperial Age is reached. It is the most powerful siege weapon with the longest base range and attack of all the units in the game. Its ability to take out buildings from a distance is unparalleled.

Trebuchets with Siege Engineers get 17 range, a value that is only matched by Turkish Elite Cannon Galleons with Artillery. Tatar Trebuchets with Timurid Siegecraft have even longer range (19). It has the highest attack of any unit in the game, on top a heavy attack bonus against buildings, and is mainly used to take out defensive structures such as Castles or Bombard Towers from a safe distance. It can also be used to take out enemy siege units, such as Mangonels and Trebuchets. However, due to the Trebuchet's low accuracy at range, Trebuchet duels can literally be a hit-and-miss affair.

The Trebuchet is constructed at the Castle in its packed form. It must spend about 7.5 ± .2 seconds setting up in order to attack, during which it is unable to either attack or move. However, the unpacking process can be canceled instantly if necessary to move to a safer location. When playing as the Japanese, Kataparuto gives Trebuchets a shorter pack/unpack time of only around 2 seconds, which saves the player roughly 5.5 seconds should the Japanese Trebuchets encounter hefty melee resistance. However, the technology does not affect God's Own Sling or Bad Neighbor. This is likely due to the coding of the technology.

It can target, attack and remove trees to allow free passage. Onagers, however, perform this task better and all the trees in the area of their splash damage are destroyed.

The Trebuchet is slow and defenseless against most units but excels at destroying any building within its path. It can also be used to counter enemy Trebuchets to good effect. However, due to its high cost, losing too many can have a serious effect on the turnout of a battle. Utilizing walls and natural barriers allow Trebuchets to attack with greater ease and destroy incoming and unpacking Trebuchets without facing much counterattack. It is imperative to guard Trebuchets with a standing army if they are used offensively. Like all siege units, they may be repaired and the presence of some Villagers may greatly prolong its combat ability. Using the "Attack Ground" option is an important skill to master when using the Trebuchet as commanding them to directly attack a unit causes any AI target to automatically flee.

When facing enemy Trebuchets, cavalry work best due to their high speed and good damage. A small group of Knights makes short work of them. Vigilance is appropriate when rushing Trebuchets with cavalry, though, because they are often guarded with Halberdiers or large groups of archers. Archer units themselves are ineffective against Trebuchets, due to the latter's high pierce armor and HP. Mangudai can also be used effectively to counter Trebuchets due to their attack bonus. Infantry and foot archers can be useful if no other units are at the player's disposal but are less desirable due to their lack of speed (except for Eagle Warriors, Woad Raiders, Condottieri, and Gbetos). This allows the enemy to respond to the situation more effectively by simply unpacking the Trebuchets and/or retaliating with an army of their own. When facing a group of archers, it is better to unpack the Trebuchet and wait for reinforcements rather than pack and retreat due to its much higher pierce armor compared to their packed version. Although immobile, it is more likely to sustain that attack. However, supplementing the player forces with archers can help, as they can whittle down the opponent's defensive army leaving the Trebuchets unguarded.

Trebuchets can also be effectively destroyed with Onagers and Bombard Cannons, the latter being slightly more effective due to having the longer range and hence possessing the ability to snipe moving packed Trebuchets. Rams also deal high damage against Trebuchets, and a Siege Ram with its splash damage can dismantle a dozen of them in a matter of seconds if they are standing close. 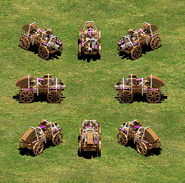 A group of packed Trebuchets 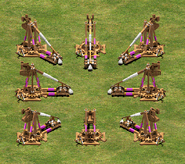 A group of unpacked Trebuchets

Trebuchets destroying an enemy fortification from a safe distance

Packed and unpacked Trebuchets in the Definitive Edition