14 feet
The Transport Ship is a Classical Age ship in Age of Mythology that can transport up to 10 (12 for Atlantean transports) land units across bodies of water. They are critical on maps where water is common and naval invasions are required. They are vulnerable to attack from enemy units so it is advised to escort them with military vessels if possible. All warships have an attack bonus against transports. They have high pierce armor so they are resistant to arrows and can survive long enough to offload troops even if being attacked by shore defenses. However they have little crush armor so are very vulnerable to siege ships and siege weapons such as Catapults or Petroboli.

Explanation of the abbreviations above the images in the infobox:

It is advisable to use Transport Ships on water maps, especially the ones with crossings, or which can directly access strategic locations, such as additional resources. Aside from making the distance an army needs to travel on water maps, Transport Ships have fast movement speed, which makes moving slow units such as siege weapons move from one location to another much more efficient.

Transport Ships are vulnerable, however, and must be properly micromanaged. Aside from enemy ships and naval myth units, the player must also be careful not to move Transport Ships close to shores which are not yet explored, as the enemy may have siege weapons or defensive structures close to the harbor, which are a big threat to Transport Ships.

Sinking enemy Transport Ships that are carrying units (identified by a flag) is a good strategy, since all of its cargo will be killed instantly. 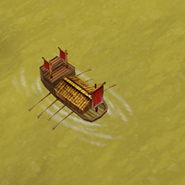 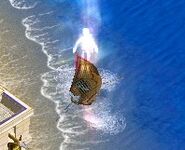 A sinking Norse Transport Ship which carries soldiers, including heroes

The Transport Ship's default Line of Sight (without any units on board)
Community content is available under CC-BY-SA unless otherwise noted.
Advertisement