The Transport Ship is a naval vessel in Age of Empires II that can be trained at the Dock. It can transport units, but cannot attack other units. The Transport Ship enables land units to be moved across water, and is useful for conducting sneak attacks or rescuing units from a lost situation. With few hit points, it possesses decent pierce armor, but if sunk, all units aboard are lost. Therefore, it is advisable to protect Transports with military vessels like Galleys or Fire Ships.

Available from the Dark Age (since The Forgotten), Transport Ships can aid in overseas raids and reconnaissance. They also make effective dummies through deception; players can have several Transport Ships garrison an inexpensive unit and encourage opponents to pursue them. This will drive the enemies main force away from a player's intended target and improve any offensive maneuver.

Transport Ships are essential in maps with large bodies of water like Archipelago and Islands since there is no other way to transport units between islands or through the sea.

If a Transport Ship with units garrisoned in it is converted, the units inside it will not be converted. The player must destroy the Transport to kill the enemy units inside. Another tactic that involves converting enemy Transport Ships is to take advantage of it and hold their population of people inside, as that population can't be used by the enemy at that moment. In free for all games when this happens some players move the converted Transport Ship with enemy units inside to the location of a common enemy for both players in order to take advantage of the current diplomacy. 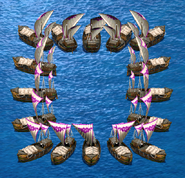 A group of Transport Ships

All Transport Ships in The Age of Kings and The Conquerors

All Transport Ships introduced in the HD expansions

Clockwise from top: Indian, Persian, Khmer, and Vietnamese Transport Ships loaded with their respective elephant units in the Definitive Edition.
Community content is available under CC-BY-SA unless otherwise noted.
Advertisement