The Trading Post is an economic/military building in Age of Empires III that replaces the trade system of carts, boats, and caravans in the previous games. Unlike most buildings, Trading Posts can only be built on site sockets found along Trade Routes and in minor civilization settlements. It periodically grants experience or resources if built on Trade Routes or allows access to native warriors and native technologies if built on those settlements.

The Native American and Asian civilizations do not benefit from the Stagecoach Line of Sight; only European ones do.

The Incas build Tambos instead, which is identical in function with the Trading Posts; but with the difference is that the Tambos have a weak ranged attack and its attack can be strengthened if garrisoned with Villagers as well as receive Home City shipments, and supports 5 population.

For each native tribe or religious community's technologies, please see their respective articles.

Levy Trading Post Rickshaw can be researched repeatedly but has a global (shared across all Trading Posts) cooldown of 160 seconds between each research. 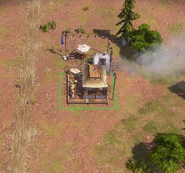 Trading Post site generated near a cliff in the California map, making it impossible to build the Trading Post on it
Community content is available under CC-BY-SA unless otherwise noted.
Advertisement