The Trade Cart is an economic unit in Age of Empires II that can be trained at the Market.

Trade Carts are used to trade and generate gold by traveling between two Markets. Trade Carts do not actually engage in the exchanging of resources between two civilizations. Empty Trade Carts travel to another player's Market empty-handed and return with gold. They receive their gold from the Markets of other players/allies, and deposit them at the Markets of their owners. The amount of gold gained depends on the distance from one Market to another. The farther away the Market is, the more gold the Trade Carts generate.

In order to generate at least one gold, the two Markets used for trade need to be at least 5 tiles away. The maximum amount gained per trip is 517, if both Markets are placed in the very edges of a LudiKRIS map.

Trade is an extremely important element in late games due to the limited amount of gold available from mines on most maps. Therefore, trade routes are a primary target for attacks and should be guarded accordingly.

Trade is also possible on the water between Docks with Trade Cogs.

Comparison to the Trade Cog[]

The Trade Cog is faster (1.32 to 1) and benefits from Careening, Shipwright, and Dry Dock (which, prior to the Definitive Edition, did not improve the gold gathering rate, as Trade Cogs got less gold per trip to compensate for the speed increase. This is no longer true in the Definitive Edition and there is an increase in overall gold gathering rate with Dry Dock). However, Docks at the same distance do generate about -25% gold than Markets, so that the gold gathering rate for a single Trade Cart is comparable to that of a single Trade Cog. However, as Trade Cogs are more prone to bump into each other and usually move along the shoreline, they quickly become less efficient than Trade Carts when more of them share a trade route. Because of this, Trade Carts are almost always preferable.

In The African Kingdoms, the amount of gold earned per trip has been increased to offset this, making Trade Cogs more viable. It depends on the map and available water and land trade lines whether they should be preferred to Trade Carts. They are more efficient if single units are considered, but are also more affected by a congested trade route. The fact that they will always return to a particular Dock (closest to 100 tiles distance) means that additional Docks placed for warship production can disrupt a trade route, while there is no such reason to place extra Markets. Also, the Trade Cart is usually safer, as its routes can be accordingly protected by defensive structures or even the player's bases, while the water is more open, making the routes vulnerable to enemy warships. 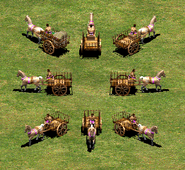 A group of European Trade Carts. 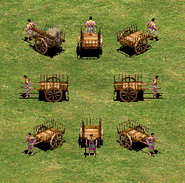 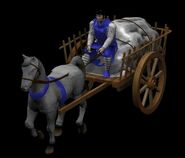 Sprites of Trade Carts in the Definitive Edition. European cart on the left, American on the right.

A render of the Native American Trade Cart.

Sprite of a Trade Cart being destroyed.
Español
Community content is available under CC-BY-SA unless otherwise noted.
Advertisement