Age of Empires Series Wiki
Register
Don't have an account?
Sign In
Advertisement
in: Article stubs, Age of Empires III, Infantry,
and 2 more

Tambo on a House of Wettin palace

10 per House of Wettin palace

The Trabant is a heavy infantry native warrior in Age of Empires III: Definitive Edition - Knights of the Mediterranean that can be trained at a Trading Post built on a House of Wettin palace.

The Trabant is a melee heavy infantry. It is effective against cavalry and Shock Infantry, but vulnerable against artillery and Skirmishers.

Compared with the Halberdier, the Trabant shares its food and coin cost, speed, Line of Sight, and melee resistance, but it is available in the Commerce Age, has less hit points and attack, costs no population space, and has a build limit, which can be increased by building a Trading Post at another House of Wettin palace or sending the TEAM Native Warrior Societies or Native Alliance Home City Cards. Like the Papal Guard, the Trabant has the Deflection passive ability, which allows it to absorb some of the damage inflicted to nearby player or ally units in a radius of 12.

While they are expensive compared with other heavy infantry units available in Commerce Age, like Pikemen or Musketeers, Trabants are useful to protect units from enemy attacks. However, it is recommended to combine Trabants with Hussars to defeat long-ranged infantry units (like Skirmishers) or artillery units, which can counter heavy infantry.

The Indian Friendship card ships 3 Trabants if the player had built a Trading Post on a House of Wettin palace.

Trabant image from the Compendium section 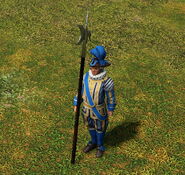 An in-game Trabant
Community content is available under CC-BY-SA unless otherwise noted.
Advertisement