Age of Empires Series Wiki
Register
Don't have an account?
Sign In
Advertisement
in: Archaic Age, Age of Mythology, Town Centers,
and 2 more

24
The Town Center is an economic building in Age of Mythology. It is the most important of all buildings as it trains villagers and provides Age advancement. In addition, each civilization can train certain other units and research certain myth technologies at the Town Center. It is also a drop-off site for all resources, though it is mostly used by herders and farmers.

Like in Age of Empires II and Age of Empires III, the Town Center can defend itself, easily dispatching early enemy units. Unlike in those games, Town Centers in Age of Mythology do not require a garrison in order to fire arrows at enemies. However, having a garrison increases the attack. It takes several units with a high hack or crush attack to destroy a Town Center, so they are generally not threatened until the Heroic Age. Town Centers can garrison up to 25 units and initially support 15 population, though this can be increased to 20 in the Heroic Age by researching Fortified Town Center.

A factor that limits the placing of Town Centers is the fact their foundations can be laid exclusively on abandoned Settlements. This limits the areas in which workers can be trained, and also negates any effort to rush with Town Centers.

From The Titans onwards, additional Town Centers can be built in the Classical Age (and earlier for the Atlanteans). It is very important to build them as they increase a player's population cap. However, they are expensive, take a long time to build, and can only be built on existing Settlements. There are three Settlements per player on a standard map, so the number of Town Centers that can be built is limited.

If a player does not have a Town Center, such as when the Nomad random map is played, they can build one in the Archaic Age.

The Greek Town Center is built quite quickly but is expensive.

The Town Center for the Egyptians is the cheapest – costing only 100 food and 400 gold – but takes the longest time to build. Egyptian players can help defend their Town Centers, especially outlying ones, by using mercenaries, who are trained almost instantly.

Unlike many other Norse buildings, their Town Centers are as strong as the other cultures' ones. The Norse can train three economic units plus their basic infantry unit at the Town Center in the Archaic Age. The infantry unit, the Ulfsark, acts as both scout and builder.

Atlantean Town Centers are cheaper and, uniquely, can be built in the Archaic Age. Before Tale of the Dragon, they had the weakest Town Centers and the least firepower, needing careful defending. The Atlanteans gain favor for each Town Center they hold.

In the very early game, three Oracle units appear at the Town Center, though they cannot be trained at this building.

Chinese Town Centers cost the same as the Greek ones, but if a player's major god is Fu Xi, they cost 20% less wood.

Two Scout Cavalry units appear at the beginning of the game. However, they can not be trained from this building again.

There are quite a few means of auto-generating resources in Age of Mythology. The following list shows all the means there are to illustrate the value of the Town Center.

A Fortified Town Center dedicated to Thor in the Mythic Age 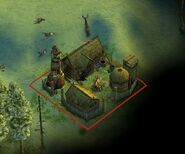 A Town Center dedicated to Thor in the Classical Age

A graphical bug, wherein the statue represented by an enemy player's Town Center turns into an Isis statue when hidden beyond the Fog of War, despite worshiping a different major god (or different culture)
Community content is available under CC-BY-SA unless otherwise noted.
Advertisement