10
70 (Spanish and Mexicans, with the "Colonial Estancias" Home City Card)

9 * no. of villagers garrisoned (see below)

Ranged attack only available when garrisoned by villagers

The Town Center is an economic building in in Age of Empires III that becomes available once the Fortress Age is reached. As it trains Settlers/Villagers and acts as the default drop-off point for Home City shipments, it is the most important of all buildings. Town Centers also support 10 population.

Up to 50 villager units can garrison in Town Centers for shelter from attacks. By doing so, they give the Town Center an attack, allowing players to survive and fend off attacks. Town Centers also automatically attack passing enemy ships at all times.

The Town Center is the most important building in the game, as it is the nucleus of every players' settlements, produces Settlers/Villagers that are the backbone of every player's empire, and serve as the only means of advancing to the next Age for non-Asian civilizations.

The Town Center is a strong building. It can defend itself from land units with its top tower with a musket, from boats with a cannon and can garrison Settlers/Villagers to protect it and increase its firepower. Except for African civilizations, Town Centers also can call in one (two with specific Home City Cards) levy of Militiamen/Minutemen/Irregulars and Sentries. The Haudenosaunee can make their Town Centers much stronger with Town Ceremony and the "Great House" Home City Card.

From The WarChiefs expansion, European civilizations and the Mexicans in the Definitive Edition can select to revolt from the Industrial Age. Revolting will also increase the Town Center's build limit to 10 and makes them no longer necessary to support population (unless when revolting to Canada, Finland, or South Africa in the Definitive Edition).

The total attack of a Town Center are calculated on the following formula:

Players can garrison up to 50 villagers, but the attack will only increase with the first 10. For example, having 8 Settlers garrisoned (at a base attack of 9) grants a total attack of 72.

The Chinese have "Boxer Rebellion" instead of "Enlist Irregulars".

"Colonial Estancias" is also available to the Mexicans. 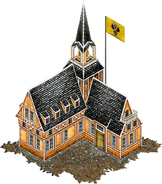 An in-game Russian Town Center in the Industrial/Imperial Age.

An in-game Town Center in the Exploration Age.