20,000
The Tower of Odin is a campaign exclusive building in Age of Mythology: The Titans, only appearing in the Odin's Tower scenario and in the Scenario Editor.

The Tower of Odin is a structure identical in appearance to an Odin player's Wonder. However, it doesn't function as a Wonder; in fact, its only function is as a mission objective. It has 20,000 hit points, 100% armor in all three categories and quick health regeneration, making it almost indestructible (ways to destroy it include many Ballistae and/or Fire Giants, for example). It is immune to the Deconstruction god power, but it can be destroyed by the Deconstruction Wonder god power that is given to the player in the Odin's Tower scenario after replacing the three Norse Temples with Atlantean ones.

"The supreme Temple of Odin on the Earthly plane, this Temple is the center of Odin's power and influence. Built by Thor himself, this Tower stands upon a precipice not accesible by human means. It is guarded by a perpetual lightning storm that destroys all enemies that come near. Approach at your own peril.

Many other temples, towers and shrines like this one exist in remote and dangerous areas of the world. They are always protected by natural phenomena and guardian creatures, mortal and immortal alike."
—In-game help section

The Tower of Odin in the Odin's Tower scenario 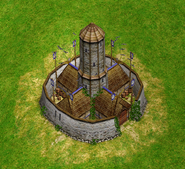 The Tower of Odin in the Scenario Editor
Add a photo to this gallery
Retrieved from "https://ageofempires.fandom.com/wiki/Tower_of_Odin?oldid=232597"
Community content is available under CC-BY-SA unless otherwise noted.