8
The Tower of London is an unconstructable building in Age of Empires II: Definitive Edition. The Tower of London has exactly the same stats and appearance as a Wonder, but does nothing in-game and is only available in the Scenario Editor.

As the Definitive Edition changed the Britons' Wonder from the Aachen Cathedral of the original version to the more accurate Chichester Cathedral, it can be presumed that the Tower of London was created as a possible alternative Briton Wonder but ended being discarded.

The Tower of London also appears in the British Home City of Age of Empires III, as a unique-looking variant of the Military Academy. 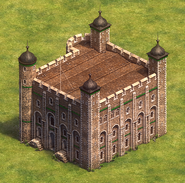