The Toshogu Shrine is a wonder in Age of Empires III: The Asian Dynasties that is unique to the Japanese and can be built to advance into the next Age. It gives the player export when built and constitutes as two Shrines by supporting 20 population, generating 0.35 food, 0.35 wood, 0.35 coin, or 0.93 XP (with the Seven Lucky Gods Home City Card) every second, and attracting up to eight animals to increase its resource generation rate, as well as having Tomb of Ieyasu which boosts the resource generation rate of all other Shrines.

Tomb of Ieyasu (passive): Increases the food, wood, and coin trickle rate of all other Shrines by 33%.

The Toshogu Shrine is an invaluable economic asset as it is incredibly powerful at producing resources, especially with the Heavenly Kami Home City Card, and should be build as early as possible on top of a herd of animals. Fully attracted by huntables and/or livestock, the Toshogu Shrine can produce two Villagers' worth of resources per second!

As the Toshogu Shrine is unique to the Japanese, only technologies that they have access to are shown in the following table:

As the Toshogu Shrine is unique to the Japanese, only their cards and other civilizations' TEAM cards are shown in the following tables: 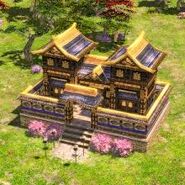 The Toshogu Shrine as it appears in-game

Photo of the real Toshogu shrine in Nikko, Japan
Add a photo to this gallery
Retrieved from "https://ageofempires.fandom.com/wiki/Toshogu_Shrine?oldid=299628"
Community content is available under CC-BY-SA unless otherwise noted.