Robert Ito
Daimyo Torii Mototada (1539 – 1600) is a character in Age of Empires III: The Asian Dynasties.

Torii Mototada serves Tokugawa Ieyasu and knew Sakuma Kichiro since he was a child. It was he who revealed that Sakuma's parents were killed under Tokugawa's orders.

During a siege of his castle at Fushimi by the forces of Tokugawa's rival Ishida Mitsunari, Mototada orders Sakuma to escape with the villagers. Fushimi castle is taken and Mototada commits seppuku (ritual suicide). Sakuma goes to fight with Tokugawa in the Battle of Sekigahara.

Mototada is similar to a Daimyo, in which he can train Japanese infantry and cavalry, receive Home City shipments, and have the Saburau Zeal ability which increases nearby friendly units' attack, but have higher hit points and LOS, slightly higher resistance, regenerates hit points over time, and does more damage in melee but, strangely, does less siege damage. Instead of dying when losing all of his hit points, Mototada will collapse and need to regenerate enough hit points to be rescued by allies, much like heroes would.

Torii Mototada also appear in random map games as one of the Daimyo (named Daimyo Mototada in-game) that can be shipped from the Home City.

Mototoda in-game as a unit 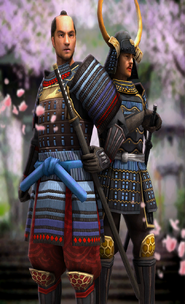 General Kichiro and Torii Mototada art for the The Asian Dynasties expansion
Add a photo to this gallery
Retrieved from "https://ageofempires.fandom.com/wiki/Torii_Mototada?oldid=283069"
Community content is available under CC-BY-SA unless otherwise noted.