Deceased (historically)
Alive (as of The Battle of Sekigahara)

Jim Ward
Tokugawa Ieyasu (1543 – 1616) was the Shogun of Japan. He appears on both random maps and campaign scenarios in Age of Empires III: The Asian Dynasties. He is also the AI personality of the Japanese. Tokugawa Ieyasu was known for many very daring battles, like the Battle of Sekigahara.

In Act I: Japan, Tokugawa exploits and attempts to conquer all of Japan's regions to become Shogun. Tokugawa commands one of his best generals, Sakuma Kichiro, to lead his armies. General Kichiro is the main protagonist. Kichiro pledges mighty loyalty to his lord, but little does he know that the future Shogun is the man who ordered his parents' deaths. Later on, a Shima General tells him the truth. Kichiro, in his fury of disbelief, slays him. Daimyo Mototada tells him the truth. But in the end, Kichiro continues his service to Lord Tokugawa Ieyasu. Tokugawa then becomes Shogun of Japan, rivaling the Emperor's power and wealth.

Tokugawa fights with a katana and has the ability to train Japanese infantry, cavalry, and artillery, as well as the Shinobi, but cannot move and attack while doing so, receive Home City shipments, and use Convert Guardian which is similar to Nature Friendship used by War Chiefs.

Like other heroes, Tokugawa has many hit points, but if he falls, he will collapse instead of dying and need to regenerate enough hit points to be rescued by allies. He can collect treasures but, unlike Sohei Archer, cannot build Trading Posts, Shrines, and Town Centers.

Convert Guardian: Converts a treasure guardian to Tokugawa's side with the process taking 4 seconds to complete. 90 seconds cooldown.

Shogunate (once shipped from the Home City)

Tokugawa Ieyasu appears as Shogun Tokugawa in random map games, who can be shipped from the Home City and retrained at the Shogunate wonder should he died afterwards. He is basically a more powerful version of the Daimyo who trains Yamabushi, Shinobi, and artillery instead of infantry and cavalry, and has Sankin Kotai which increases the hit points of nearby friendly units.

Sankin Kotai (passive): Shogun Tokugawa increases the hit points of friendly units in a radius of 24 around him by 10%.

Shogun Tokugawa is automatically upgraded in every Age up starting from the Fortress Age.

As Shogun Tokugawa is unique to the Japanese, only technologies that they have access to are shown in the following table:

As Shogun Tokugawa is unique to the Japanese, only their cards and other civilizations' TEAM cards are shown in the following tables:

Tokugawa is the Japanese AI personality in random map games. He appears to be clever and power-hungry. Tokugawa's taunts are mostly about becoming a great man; his realization of his greatness is easily seen in his personality. He also refers to himself in third-person as "Tokugawa". 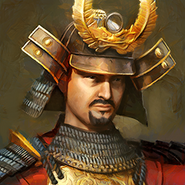 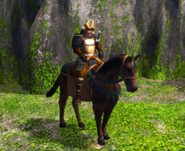 Wikipedia has an article about:
Tokugawa Ieyasu
Community content is available under CC-BY-SA unless otherwise noted.
Advertisement