The Tokala Soldier (Dog Soldier before the Definitive Edition) is a melee heavy cavalry in Age of Empires III: The WarChiefs that is unique to the Lakota and can only be obtained through Tokala Ceremony and Lakota Tokala Soldiers, or shipped from the Home City. It is the strongest Native American cavalry unit and the third strongest melee cavalry in the game along with the Cuirassier – the second if they are fully upgraded.

Tokala Soldiers have great hit points, excellent speed and good attack (though slightly lower than some other heavy cavalry) and function like a Lancer, good against infantry units and as a cavalry it is also good against archers and artillery. They are also free of cost, and realizable either at the Community Plaza by doing the Tokala Ceremony, by the Lakotan Town Center's Big Button technology, or via the Tribal Council. Because of the large number of Villagers needed to produce Tokala Soldiers at the Community Plaza, Tokala Soldiers are very difficult to make in large quantities. But the Tokala Soldier don't need any Houses since they already have a two hundred population cap from the beginning which makes massing easier, plus they also become improved for free as a player advances in ages. All of these things put together make the Tokala Soldier one of the strongest and most effective cavalry units available in the game.

The "Riding School" Home City Card and Cheyenne Horse Trading do not decrease the training time of Tokala Soldiers, but the 10% cavalry training treasure on certain Asian maps will reduce the training time from 20 seconds to 18 seconds with 25 Villagers.

The Tokala Soldier is automatically upgraded in every Age up starting in the Fortress Age. 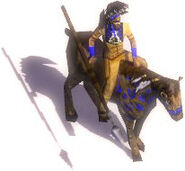 An in-game Tokala Soldier in the original The WarChiefs