The Tlaloc Canoe is a warship in Age of Empires III: The WarChiefs that is unique to the Aztecs and can be trained at the Dock once the Industrial Age is reached. It can transport land units and also gather from fishes and whales.

Tlaloc Canoe is very effective against other boats and undefended buildings, but like all ships, it is vulnerable to artillery and defensive buildings. It has good range, speed, and damage, but like all canoes, is most potent if built in numbers. The Tlaloc Canoe is the strongest native boat in the game, being able to defeat most Galleons in one-on-one combat. The Frigate can defeat them by a very narrow margin, but Tlaloc canoes are much cheaper than frigates. It can also fish, but like all other canoes and the Marathan Catamaran, it is far less efficient at the role than other Fishing Boats.

As Tlaloc Canoes are unique to the Aztecs, only technologies that they have access to are shown in the following table:

As Tlaloc Canoes are unique to the Aztecs, only their cards and other civilizations' TEAM cards are shown in the following tables: 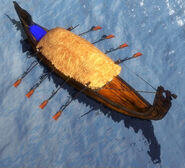