Places the lost Titan Gate
Titan Gate is a Titan Age god power in Age of Mythology that is available to all civilizations. When cast, it summons a Titan Gate, a building which needs to be excavated by villagers or Norse infantry to release a Titan, the strongest of all units.

The placement of a Titan Gate is important, as Titans cannot cross water. In addition, it takes a considerable amount of time to excavate the Gate (three-quarters as long as a Wonder); defenses must be set up to prevent enemy armies from destroying it. On the plus-side, Titan Gate foundations are not susceptible to the bonus damage incurred by all other building foundations when attacked. The player must also be prepared for the considerable population increase after the Titan is unleashed. 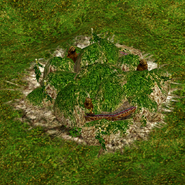 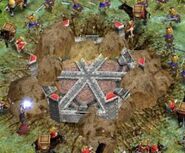 A Norse Titan Gate where a Titan has previously emerged

A Norse Titan Gate under attack and almost destroyed
Add a photo to this gallery
Retrieved from "https://ageofempires.fandom.com/wiki/Titan_Gate?oldid=234342"
Community content is available under CC-BY-SA unless otherwise noted.