2-3
The Tiger appears in the Rise of the Rajas, and is one of several hostile animals that the player may encounter in unexplored areas. In the Tiger's case, it appears mostly in maps set in Southeast Asia. It holds no food and attacks Villagers and even some military units on sight. As it will most likely prevail against Villagers that do not have the Loom upgrade, it is recommended to research it before sending them in unexplored areas.

3-5
The Tiger in Age of Mythology: Tale of the Dragon is a huntable animal, but also a dangerous predator that will attack any nearby workers. It is less dangerous than the Crocodile or Lizard, but also only provides half as much food.

13
The Tiger is a large carnivorous Treasure Guardian that is featured in Age of Empires III: The Asian Dynasties. Tigers are found on every single Asian map in the game, from Ceylon to Siberia.

Both Siberian and Bengal Tigers are also featured as pets, trained by Indian Monks, the Brahmin. 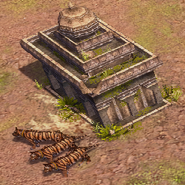 1.5
Axehilt is a pet Tiger in Age of Empires III: The Asian Dynasties. He is the most powerful of all pet animals that can be trained by Explorers but is also the most expensive (135 food) and has the longest train time (22 seconds). He is very similar to Wagner the Pet White Tiger but has more attack damage and less hit points. As all pets it receives free upgrades upon every Age up.

Compared to other pets, Axehilt is not extremely good at killing Treasure Guardians due to his small multiplier, but it is better at fighting human combatants. Against Treasure Guardians, Axehilt has approximately the same damage per second as Fang the Tame Coyote that is a lot cheaper (50 food).

Pet Tigers do not cost population but have their own population limit (10). Using Tigers is an indirect way of increasing your population limit similar to natives. Indian players may have access to both Tigers and White Tigers giving them a population advantage over their enemies once population capped. It is also important to note that Tigers can be trained directly on the battlefield (similar to Daimyo, Chinese Monks, or other Explorers who have access to pets).

Axehilt automatically gets stronger when advancing in Age.