Age of Empires Series Wiki
Register
Don't have an account?
Sign In
Advertisement
in: Wildlife, Age of Empires III, Treasure Guardians,
and 2 more

6
The Tibetan Macaque is a small Treasure Guardian in Age of Empires III: The Asian Dynasties. It is the second-strongest of the macaques, and is slightly weaker than the Snow Monkey, but is stronger than the Lion-Tailed Macaque. The Tibetan Macaque can be found in the maps Yellow River, Himalayas, Silk Road, and Upper Himalayas.

They are generally found in groups of at least three, and up to 10, guarding a Treasure, and they can be obtained as a pet named Freitag the Pet Macaque, either as a single individual from an unguarded Treasure, or as a family from a medium guarded one. 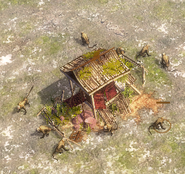 1.5
Freitag is a pet Tibetan Macaque in Age of Empires III: The Asian Dynasties.

He is tied with Fang the Tame Coyote for the weakest pet in the game, having the second lowest HP and the weakest attack among pets. They are fairly rare, appearing on very few maps, mostly in Indochina and the Himalayas, where they may rescued from unguarded Treasures.