The Thuggee is an Indian outlaw in Age of Empires III: The Asian Dynasties. It is available on the Deccan map.

The Repentant Thuggee and Marathan Thuggee are Indian rifle-wielding mercenary units that have a good ranged attack. The attack exceeds almost any standard and most upgraded ranged units attack (56 ranged damage) by a great margin, and they can really deal damaging blows to most infantry. The repentant version also counters cavalry, due to the fact it has no penalties and high damage.

3.0
The Delinquent Thuggee is the treasure guardian version of the Thuggee. It yields more hit points and speed than their mercenary counterpart, but deal less damage and lack the melee multiplier against heavy infantry, light cavalry, and cavalry. Nonetheless, it is recommended to tame Delinquent Thuggees rather than attack it, as it may take a long time to defeat it.

Delinquent Thuggees can be found guarding treasure in maps such as Indochina, Deccan, and Borneo. 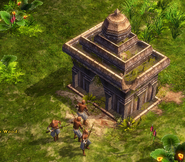