The Throwing Axeman is the unique unit of the Franks in Age of Empires II. It is an infantry unit with a ranged melee attack.

The Throwing Axeman deal melee damage at range. That can be very useful, especially in dealing with most traditional anti-archer units (most prominently Skirmishers and Huskarls). Also, since Throwing Axemen have an attack bonus against buildings, they can be used in large mobs as a practical alternative to siege machines.

Throwing Axemen can destroy Rams quickly, without having to compromise defenses by opening Gates. They deal high damage for a ranged unit, particularly against buildings, and can take more hits than the average archer. However, their inferior range means that Throwing Axemen are vulnerable against melee units, siege weapons, and hit-and-run tactics employed by archers. They are not as vulnerable to Mangonels and Onagers as archers due to their higher HP (they require 2 shots to be taken down), but Siege Onagers will still kill them in one shot. Throwing Axemen, however, can kill said siege weapons easily due to their melee damage as long as they can avoid being hit and can close the gap. Heavy cavalry units such as Paladins are also quite effective against them, though Hussars are not a suitable choice.

Since the Franks are reliant on their Paladins, using Throwing Axemen against cavalry counters such as Camel Riders and Halberdiers is a promising tactic, since both units have low melee armor. Combined with Paladins, they can cover each other's weaknesses.

It is not advisable to try to kite melee units using Throwing Axemen as they have a long frame delay.

As Throwing Axemen are unique to the Franks, only technologies that are available to them are shown in the following table: 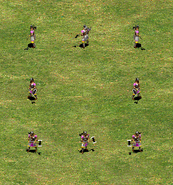 A group of Throwing Axemen.

A small group of Throwing Axemen attacking retreating Villagers near a central hill on a Gold Rush map. 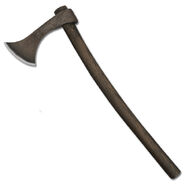 The real francisca was a much smaller, single bit axe rather than the one depicted in-game. 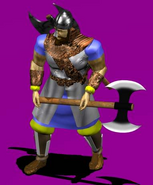 A render of the Throwing Axeman model.

Throwing Axeman in the HD Edition and Definitive Edition 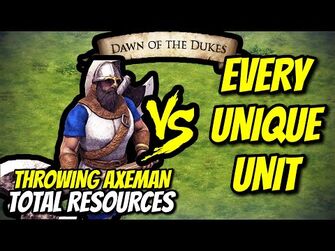 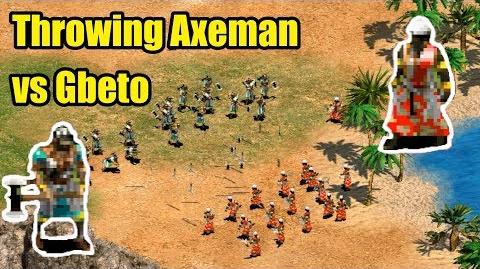