3
Theodoric the Goth is an infantry hero in Age of Empires II. He has the appearance of a Huskarl. As a hero, he cannot be converted and can regenerate health (since The Conquerors).

Although first introduced in The Age of Kings, Theodoric was only available in the Scenario Editor prior to the release of Age of Empires II HD: The Forgotten, where he is renamed Alaric and appears in two scenarios of the campaign with the same name: All Roads Lead to a Besieged City and Legionaries on the Horizon!. Theodoric appears again in the first scenario of the Tariq ibn Ziyad campaign in Age of Empires II HD: The African Kingdoms, where he is renamed Roderic.

In the Definitive Edition, Theodoric shares his portrait icon with Alaric the Goth and Ataulf. 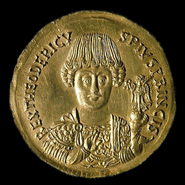 Contemporary portrait of Theodoric the Great on a triple solidus, c. 491-501 CE

The Mausoleum of Theodoric the Great in Age of Empires II and in real life.
Community content is available under CC-BY-SA unless otherwise noted.
Advertisement