Barbarossa's March
The Lombard League is the fourth scenario of the Barbarossa campaign in Age of Empires II: The Age of Kings. It is loosely based on Barbarossa's fifth and final Italian campaign (1174-1177) and the punitive campaign against Henry the Lion in Saxony (1180-1181).

As long as Barbarossa's knights were present, peace endured. But the emperor could not be everywhere at once. Whenever he went to Italy, Germany would flare up, and when Barbarossa returned to Germany, the Italians began plotting again.

Milan had fallen, but the remainder of the Italian cities joined together in a confederation known as the Lombard League for the purpose of defeating Barbarossa.

If Barbarossa intended to make Italy part of the Holy Roman Empire, he would have to conquer the Lombard League city by city.

But Barbarossa still had a secret weapon: Henry the Lion and his seasoned troops.

Remember to sail east on the transports to get a navy and additional units. There are two viable areas to build your town; the area immediately south of your old town and another area across the ocean to the northeast, close to Padua. The northeast area is a good choice if you wish to build a Castle, since it is awkward for Henry The Lion to attack you there. Be sure to reorder your boats so they sail directly there and don't get hit by the Venitian towers to either side of the journey. Padua will be occupied with your old walls for some time so will not immediately be aggressive; you will have time to build a town. Build your town northwards, behind the patch of trees and towards the edge of the map, to avoid the Venitian navy which can be quite aggressive. A good place to build your castle is in front of the left set of shallows; this places it close enough to Padua to defend you across the river, and forces ships to sail up the river to attack the castle, meaning they come into range. Be sure to research your unique technology to give your castle more range, it will make things easier. Good unit choices are Halberdiers to counter the Paduan cavalry and some Cavaliers of your own to take care of any of Henry's Teutonic Knights or Paduan Trebuchets. Punch away at the Paduan walls with some Trebuchets, with your units in front of them to defend; your castle and units should defeat them easily and drain them of resources. Edge forward until you have destroyed their town, then build the wonder there. Defending it not necessary as you win as soon as construction of the Wonder is completed.

Additionally, the level can be beaten in 20 minutes by following this strategy: 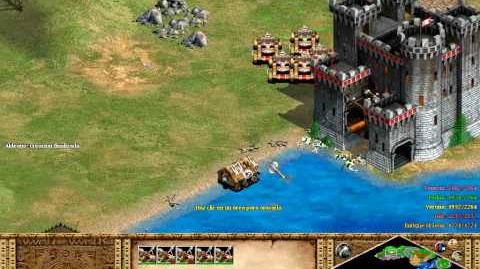 Full map
Add a photo to this gallery

Henry the Lion was immediately banished to England. Separated from his wealth and army, there was little more he could do to plague Barbarossa.

After six campaigns down to Italy, Barbarossa was weary of crossing the Alps.

The fighting ended with the signing of the Treaty of Constance, which said effectively that the emperor and the pope were equals.

It was a tenuous peace, and one that seemed unlikely to endure when, suddenly, the pope died.

The new pope was less interested in squabbling with the emperor than he was with events down south. You see, the Europeans were being driven out of the Holy Land. It was time for another Crusade.

Retrieved from "https://ageofempires.fandom.com/wiki/The_Lombard_League?oldid=317993"
Community content is available under CC-BY-SA unless otherwise noted.