Age of Empires Series Wiki
Register
Don't have an account?
Sign In
Advertisement
in: Articles needing an image, Historical Maps, Age of Empires III, Knights of the Mediterranean

The Italian Wars is a historical map released with Age of Empires III: Definitive Edition - Knights of the Mediterranean.

Players start in a fortified city. A large river separates four influential Italian city-states that must be captured and retained.

City States must be captured to win. Each of the four city-states offers unique upgrades, units, and resources. All City States have one Trading Post and Two City Towers sockets, while they can have either a Papal Embassy or a Great Bank.

Allegory of the supremacy of Charles V over his enemies.

Detail of a tapestry depicting the Battle of Pavia with the alleged portrait of Galeazzo Sanseverino, woven from a cartoon by Bernard van Orley (c. 1531). 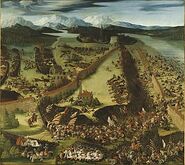 The Battle of Pavia, the most important battle in the Italian Wars.
Community content is available under CC-BY-SA unless otherwise noted.
Advertisement