The Horns of Hattin

The Siege of Jerusalem
The Horns of Hattin is the third scenario of the Saladin campaign in Age of Empires II: The Age of Kings. It is based on the Battle of Hattin (July 3–4, 1187).

Galilee. Year twenty of my capture.

Last night, we rode into a sandstorm. The men dared not open their mouths to speak. We clung to the necks of horses or camels while waves of sand rose and fell around us.

The Saracens have pursued a large force of Europeans into the desert. The Crusaders carry with them a relic - a piece of the True Cross. Capturing this artifact will deal a severe blow to the morale of Saladin's Christian foes.

I asked Saladin why we were here, miles from civilization and water. He said 'to bring crimson death to the blue-eyed enemy.'

The huge Crusader army has halted to make its stand beneath the two peaks called the Horns of Hattin. At the Horns is only a single pool of water, and Saladin controls it.

At night, the Saracens ride out and extravagantly pour out vessels of water into the sand within sight of the thirst-crazed Europeans. It is cruelty worthy of a... Crusader.

The Saracens attempt to capture a holy relic from the Knights Hospitaller in the desert. You start with two camps, neither of which are especially well-defended. The northern base contains at least one of each major Feudal Age building, nine Villagers, a flock of Sheep, and most of your military units (all except the Cavalry Archers). The southern base has three Villagers, four Cavalry Archers, a Town Center, and one of each military building (Barracks, Archery Range, and Stable). There is gold in the southern base as well as northeast of your main base across some shallows and slightly south. You start with more than enough Houses to support a population of 75, so you won't need to build any more unless your enemies destroy enough of them. Both of your bases are surrounded by Palisade Walls, though these won't keep your enemies out for very long. This scenario is unique in that no players are allowed to build Stone Walls, towers, or Castles even if they buy stone. As a result, there is a much lesser degree of map control and there are no unique units (save a few Teutonic Knights that the Hospitallers have at the beginning). It is also impossible for any civilization to advance to the Imperial Age.

The map is very crowded, and enemy bases are located very close to your base. Jerusalem (blue) is in the far south, and they'll mainly attack with Spearmen and Men-at-Arms. They cannot advance to the Castle Age. The British (red) are between your two bases, just southeast of the northern base. They start in the Feudal Age, but will advance and send out Crossbowmen as well as Scorpions and Battering Rams. The Knights Templar (yellow), just southwest of your base, start in the Castle Age and attack with Knights, Elite Skirmishers, and Mangonels. The Hospitallers (orange) also start out in the Castle Age and rarely attack, aside from the occasional Knight or Long Swordsman. Their base is in the far west corner of the map.

Starting off and advancing in age[edit | edit source]

Your first goal should be to advance to the Castle Age, as you'll need Monks to complete the scenario and Castle Age units to adequately defend yourself. Immediately after the scenario starts, use your Market to sell all but 100 stone. Your only use for stone is to repair your Town Centers, and repairing them doesn't consume any stone (but you still need at least 1 stone in your stockpile to do the repair, and they can only be sold in increments of 100). You have enough Villagers, so get four working on each resource. Your north base has food and wood (the trees in the north corner are a good place to build a Lumber Camp). The major asset in your south base is the gold mine. Get the three Villagers there to begin mining, and send a Villager in your north base to locate and begin gathering from the mine in the northeast.

You also need to prepare for Jerusalem's first attack. An old foe of yours will make a guest appearance, bringing along some Cavaliers. They may attack either the north or the south base. If you are playing the The Age of Kings, you may attempt to convert this old foe. (Converting hero units is impossible from The Conquerors expansion onwards)

Although you can't build a Castle, a Town Center garrisoned with Archers is a feasible alternative. Castles have a longer range and can take more damage, but the attack power of a Town Center is comparable. Create Archers until you have ten in each Town Center, with the accent on your southern base. If Reynald attacks the southern base, you will almost certainly lose it without an Archer-guarded Town Center, even on standard difficulty, as his units, particularly his Cavaliers, will be more advanced than yours. Also create some Spearmen to counter heavy cavalry in your south camp.

It will be a while before the next heavy attack, so you'll hopefully have time to advance in age. Your starting units can take care of the first few attacks in the north, but it may be wise to research the Man-at-arms upgrade and create a few soldiers in the south if the British can advance to the Castle Age before you do (to counter their Battering Rams). Defense should always be your first priority in this scenario, but don't forget to research economic technologies when you can afford them as well.

You're in a much better position to defend once you reach the Castle Age, as you can create a wider variety of units. Unfortunately, your foes will soon be ready to launch more severe attacks. As soon as you can, build a Siege Workshop in your northern camp. Scorpions are excellent for defense in this scenario and you should try to have 3-5 of them close to your Town Center at all times. Unlike Town Centers, their range is long enough to return fire on all ranged units your enemies will use (aside from British Crossbowmen, which Scorpions are still effective against). Furthermore, they have enough attack power to take down light foot-soldiers with ease - even in masses. Finally, Scorpions are much easier to micromanage than cavalry units. This line of defense, along with the garrisoned Town Center, should be enough to protect your Villagers from harassment.

To deal with siege weapons and enemy cavalry, create around five Knights in each base. Camel Riders are effective against cavalry too, though should be used sparingly as they're not very good against anything else. Keep these units back and use them only on units your Scorpions can't handle. Creating enough units to protect your bases should be your top priority, but there are still some defensive technologies worth investing in when you get the chance (Crossbowman, Fletching, Husbandry, Bodkin Arrow, and Masonry - build a University when you can).

Capturing the Piece of the True Cross[edit | edit source]

Continue defending and gathering, researching military and economic technologies as you can afford them. You'll need to build a Monastery in your northern base so you can create Monks. The gold mine in the south should dry up eventually, in which case you can move all of its units to your main base. When you're ready, build up your forces. Create at least five Monks and a wide variety of other troops (Knights or Light Cavalry, Scorpions, Cavalry Archers, and Camel Riders). You won't need any rams, as the only building you have to knock down is a Palisade Wall.

The Relic itself is guarded by Monks in the Hospitallers' base to the west, surrounded by Palisade Walls. It's not particularly difficult to guard your Monks from their forces, and you do not need to defeat any of the enemy players. It may still take a few tries however. You must bring the Relic back to the flagged area in your base (between the "horns") rather than garrisoning it inside a Monastery.

Alternatively, follow this strategy to beat the level in less than 10 minutes: 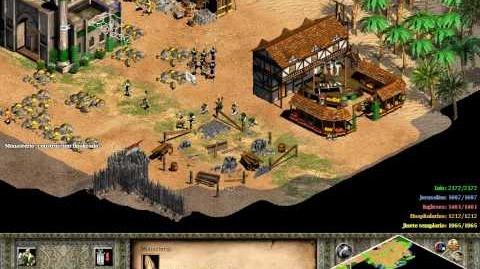 The fighting was fierce - the Crusaders had to conquer or die. Mostly, they died.

Saladin has treated his prisoners well, providing them with icewater from the mountains and comfortable tents. For the first time in years, I have been able to speak with fellow countrymen. But I am unsure what to say to these... invaders.

Not all of the prisoners were treated so royally. Reynald de Chatillon was captured here and, fulfilling his vow, Saladin sliced off Reynald's head with his own scimitar. How ironic that it was only after the Crusaders entered their lands that the Saracens were transformed into the people that we set out to destroy.

Real development of the Battle of Hattin
Add a photo to this gallery
Retrieved from "https://ageofempires.fandom.com/wiki/The_Horns_of_Hattin?oldid=326184"
Community content is available under CC-BY-SA unless otherwise noted.