Sleep in the saddle. Drink the rain. Eat nothing but dried meat, dried milk, and horse blood. Such is the life of a Mongol at war.

At night we are rewarded with fermented yak's milk and the promise of Persian treasures.

Driven on by the words of the Great Khan we have crossed miles of the Asian continent at a full gallop.

Before us lies the vast empire of Persia.

The Khwarazm Shah will be given one chance to submit, and then his cities will be pulled down brick by brick. But not all of us head into Persia.

Genghis has sent Subotai Ba'atur of the Reindeer People north into Russia. The Russian principalities are disorganized, and Genghis hopes that Subotai can break them one by one. Then the borders of Mongolia will cover all of Asia.

To win, the player must defeat the Russians and Khwarazm. The player will lose if Subotai dies.

There is a camp of Merkids west of Subotai's base at the north of the map, who will resign when they lose all their military units, providing several buildings and tributing resources for the player. The player should hold off defeating this camp until they can adequately defend it. Alternatively, the Merkids will resign when Khwarazm detects the player's military units inside the city of Samarkand.

The Russians will occasionally attack Subotai's base with a mix of infantry, cavalry, and siege. They will resign when they lose their Castle and have less than four military units.

Khwarazm occupies the south quadrant of the map, with the heavily defended city of Samarkand along the southwest edge of the map. If the player takes too long delivering the Trade Carts, the Persians will attack. They will also attack if the player sends military forces inside their walls. They will resign when they lose their Wonder and their two Castles.

Both Genghis' and Subotai's forces begin separated by a cliff, and it is only possible to unite them after advancing towards the Persian citadel. Subotai attacks Russia (Goths, Slavs in the Definitive Edition) from the north while the Khan must first deliver a gift to the Persian Khwarazm shah within 30 minutes (13 minutes and 20 seconds in the Definitive Edition) - but the presents are actually assassins hidden inside two Trade Carts, who will attack the Shah until he dies.

It is best to build up the military of the eastern camp first, since the Persians will be much more aggressive than the Russians. The Russians will only send in small waves of infantry which can be easily repulsed. The Shah's army consists primarily of Paladins and War Elephants as well as some siege while the Russians primarily produce infantry, rams as well as Boyars in the Definitive Edition.

The player should focus on training Cavalry Archers in the northern camp and anti-cavalry (camel/spear) units in the east to effectively counter the Russians and Persians, respectively. The Mongols have terrible Monks, so converting the War Elephants may not be all that effective. Monks can help dealing with the Persian army, however. It may be a good idea to wall off crucial segments in the eastern part of the map to help defend against the Persian War Elephants. The player should also focus on raiding Persian gold stockpiles to hinder their production of heavy cavalry and elephants. After the Shah is defeated, the combined forces of Subotai and Genghis should then clear up the poorly defended Russians with little trouble.

After bursting from their Trade Carts, the assassins will not be attacked by the Persians until they kill the Shah. Take advantage of this by killing all of the Shah's ceremonial troops (who incidentally also comprise most of the Persian Army), then slaughter the Shah without fear of retaliation. The two assassins alone can thus cause serious damage before the player's troops even arrive. Additionally, only the Castles and the Wonder need to be destroyed to defeat the Persians, so consider destroying them before assassinating the Shah. This can best be accomplished by building Siege Workshops in the Persians' base and creating Battering Rams. 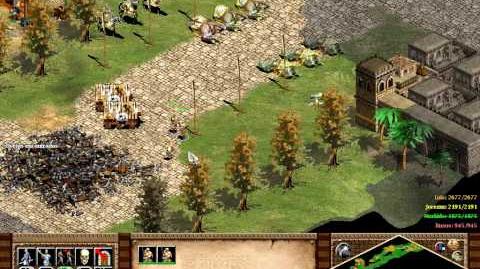 In the Definitive Edition, the Persians will retaliate if the Shah is not killed within a few seconds of their appearance. However, the strategy can still be replicated as the Persians will not change their diplomatic stance in the first 13 minutes and 20 seconds as long as the player does not bring the Trade Carts. This means the player can change the diplomatic stance to neutral and use Battering Rams to destroy the Castles and the Wonder before the Persians become enemies.

The Persian army numbered nearly half a million men but was beaten by a Mongol army less than half that size. The governors of outlying cities were executed by pouring molten silver into their eyes and throats.

The capital city of Samarkand, which was expected to withstand our siege for a year, fell in five days. Separate mountains were made of the skulls of men, women, children, horses, dogs, and cats.

We roamed the streets in wonder at the opulence of the Persians, drinking at their fountains and gorging ourselves on sherbert and tropical fruit. For a man born in a tent, it seemed as if Genghis Khan had torn open the gates to Heaven itself.

Russia and Mesopotamia were now ours to command. The empire now stretched over seven thousand miles from the Pacific Ocean to the Black Sea. We were about to enter Europe when tragedy struck.