Age of Empires Series Wiki
Register
Don't have an account?
Sign In
Advertisement
in: Age of Empires II, Lords of the West, The Hautevilles

The Hautevilles is a campaign in Age of Empires II: Definitive Edition - Lords of the West. It is based on the exploits of the Hauteville dynasty (Italian: Altavilla), a Norman royal dynasty who rose to prominence after conquering southern Italy and establishing the Kingdom of Sicily as one of the most tolerant and progressive states in Europe at the time, as well as their participation in the First Crusade. The Hautevilles ruled until the late 12th century, after which the Kingdom of Sicily fell into the Germanic Hohenstaufen rule.

The Hautevilles campaign consists of 5 scenarios. The player plays as the Sicilians, and the player color is blue. 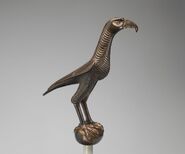 Falcon ca. 1200–1220; it suggests a link to Emperor Frederick II (r. 1215–50), who wrote the standard medieval treatise on the art of falconry, an aristocratic sport that he pursued avidly. The MET
Community content is available under CC-BY-SA unless otherwise noted.
Advertisement