N/A
The Emperor Sleeping is the sixth and final scenario of the Barbarossa campaign in Age of Empires II: The Age of Kings. It is based on the German Crusaders's plan to carry Barbarossa's pickled body to Jerusalem after his death, which was ultimately abandoned.

Barbarossa's soldiers were devastated. Several knights committed suicide. Others converted and joined the Saracens, so convinced were they that God Himself had deserted them.

However, a handful of knights were not yet willing to board a ship bound for Europe.

The body of mighty Barbarossa was fished out of the river, pickled in vinegar, and sealed in a barrel. The army of the Holy Roman Empire would not be joining in the Crusade.

Yet there was still a chance for a small victory. The surviving knights vowed to take Barbarossa's body on to Jerusalem. Even in death, the emperor would keep his promise!

You must break the walls and get through Saladin's camp to get to Jerusalem that create no units other than Monks, and most towers should be destroyed to help the Trade Cart make it. You lose if the Dome of the Rock gets destroyed (similar to Saladin), or if the Trade Cart dies (similar to Joan of Arc). Since Damascus is Persian and usually sends Trebuchets, Paladins and War Elephants at you, it might be a good idea to convert these to protect and replenish your soldiers.

There are actually 2 Saracen towns, one in the east and one in the south just north of Jerusalem, the latter of which is completely walled in as stated above. It would be a good idea to destroy the eastern Saracen town before breaching the walls to the central Saracen town. If the walls are breached before the eastern town is attacked all the surviving villagers will flee to the southern town.

There are 2 Relics on the map, one just south of your starting point, which should be grabbed immediately by your Monks before the Saracens do so, and another one in the east deep inside the Saracen base. Picking up the 2nd Relic is a lot more difficult but can be done if you surround the Relic with your units or build a Palisade Wall around it to prevent any Saracen Monks from picking it up until you can send one of your own Monks to collect it (which on Standard difficulty is trivially easy if you get a Monk out within 2 minutes into the 10-minute countdown). Researching Fervor to increase your Monk's movement speed would be very useful in this regard (already researched in Standard difficulty). Either way, having an unlimited supply of gold will make the scenario easier as the majority of the gold seams are located in enemy territory.

Pausing the game the instant the scenario starts to issue orders is highly recommended. You need to build a large number of houses immediately, but leave room for farms around your Town Center and Mill. Do not build too close to the cliffs in the southeast, or Saracen Trebuchets will attack you. Ensure lumber harvesting begins as soon as possible, as you will need a lot of wood and food.

Stone is only found on your side of the wall southwest of Richard's camp. Send two or three villagers there from the beginning to mine it (make sure they do not get onagered to death as collateral damage when they trigger Richard to suicide into the Saracens, and also build a market near your initial TC, and trade with Richard's market). Place your first (and likely only on Standard difficulty) castle east of the tower directly south of your base, which illuminates the nearest relic AFTER you build your monastery southeast of the Relic. Use your Paladins to ride ahead and kill the wolf. Send your first Monk to the relic in the eastern Saracen base (see map above) and use your second Monk to pick up the closer relic. Build that castle on the small rise in the ground, with its lower left side directly adjacent to the trees, or perhaps a grid or two north or northwest (not too close to the cliffs, though the forest will funnel enemies coming between the cliff and Damascus's wall into castle range anyhow). build two Barracks north or northwest of it and a Stable. One Trebuchet to help raze that tower quickly, so it doesn't distract your Castle for too long, is a good idea. Repair the castle with villagers as needed.

Wall off the eastern Saracen base by building two blocks of Palisade walls slightly to the right of their gate, for some reason this prevents the Saracens from attacking. Walling off the yellow base initially (beware the gap in the wall just east of their eastern gate) to prevent them from sending too many elephants to wander around your turf in the first 10 minutes can also be wise.

Research Halberdier, and spam them. Research Blast Furnace and then the other Blacksmith techs. 20 Halberdiers with 2 (later 3-4 when you can afford it) Monks will stab Persian Paladins and Elite War Elephants to death in seconds. This is so fast they can't even surround the elephants with more than 6 or so men before the elephant dies, and will not lose any to even the elephants (usually) if Monks are on hand. Don't be afraid to use Pause Game (set the hotkey to P or whatever you find convenient) to micromanage. 5-8 Paladins to deal with Trebuchets and Crenellations to kill Onagers (if the Paladins are busy with the Trebuchets) will eventually bleed the Persians dry of gold. Then you can push forward with your 2-3 Trebuchets, squad of Paladins (against siege weapons), and Halberdiers into the yellow base. Eliminate everything but the walls. Then proceed eastward and sack the eastern Saracen town (memorize layout from the first ten minutes, or just send a Scout Cavalry to run around the towns). 5+ Hand Cannons to quickly eliminate Monks and Arbalests can be a good idea as Teutonic Paladins are slow.

Once you are ready, bring your army to the yellow walls, set up the Trebuchets, place a castle close to the walls, as possible, and breach the walls with the Trebuchets within 10 seconds of the castle finishing. You will have a serious fight on your hands, but if you do it right, within 5 minutes the Saracens should be at least mostly out of siege equipment, and you will be able to push forward and set up a castle and military base where the tents used to be. Replace your losses with Hand Cannons (or massed Elite Skirmishers if you haven't been trading and milking those two relics for gold, and using Monks to conserve troops), as the Saracens have a lot of horse archers and Arbalests. Skirmishers are better against the enemy units, but you should take into account how Hand Cannons can silence Monks much faster when choosing units. Protect the town with a few Paladins with a Monk in the back, while your main army proceeds south, then east. Kill everything you can see except the Damascus houses. Then head west, mop up everything else outside Jerusalem's walls.

You need only knock down 2 wall blocks and 3 of Jerusalem's towers (including the 2 guarding the Dome of the Rock) if you infiltrate the city by its eastern edge. Hand Cannons will save you from the Monks that rush toward the breach in the wall. Make sure to save before sending the Trade Cart out from your base. Spies is essential to ensure its safety (even if Damascus and Saladin both resigned, Monks and towers are dangerous), and by fighting the first half of the match like a Trash War, you should have plenty of gold once you've finished killing as much of the Saracens as you can find, which should bring the price down to almost nothing. The relics and trade with Richard's market (1 Trade Cart is enough, you don't have that much pop cap to play with) should have brought you plenty of gold anyhow.

By following this strategy, the level can be beaten in less than 10 minutes. 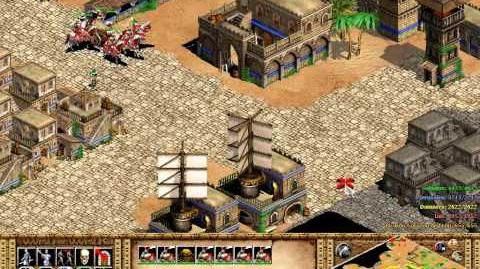 Note: This strategy cannot be replicated in the Definitive Edition. First and foremost, in the Definitive Edition, any attempt to change one's stance to Damascus or Saladin as neutral will immediately result in both factions changing their stance to the player as enemy. Jerusalem will also have several Skirmishers and Crossbowmen at the ready in their base, along with Monks, and, if too much time has expired to let the faction attack, the Saracens will immediately target any of the player's units in the vicinity, which will be guaranteed because of all these obstacles being in the way.

In the Definitive Edition, the only way one can breach Damascus' walls as an "ally" is to build a Siege Workshop in Damascus' base and build some Mangonels or Bombard Cannons and ground attack the walls until they break down, as done in the following video: 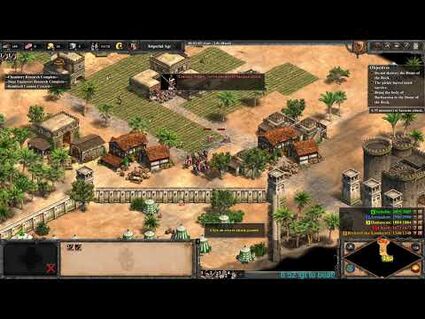 The player can also use their initial resources to build a Castle near Jerusalem's Wall, as it will deal with the Archers, Skirmishers and Monks, along with the Saracen forces. Then the Cart can reach the destination accompanied by the player's starting Paladins.

There is a legend concerning every great king, from Arthur on through Barbarossa, that says the king will return someday when his country needs him. Myths and legends about the sleeping emperor were passed down in German folktales. The Holy Roman Empire did not endure.

She fell back into a patchwork of tiny nations. Some would say Barbarossa's rule was a failure.

But is it not a greater testament to the man that it was the force of his will alone that held the empire together?

And what of Henry the Lion? With Barbarossa gone, there was nothing stopping him from returning to the Holy Roman Empire.

But I am an old man now. What harm could I possibly do?