The Deluge is a historical map released with Age of Empires III: Definitive Edition - Knights of the Mediterranean.

Steppes and temperate woodlands are separated by a single trade route. The players' teams are divided into north and south. The southern team must defend against early cavalry aggression. Players start with a Command Post instead of a Town Center. It features three special technologies:

The occupation of the Commonwealth by Sweden, Russia, Brandenburg and Khmelnytsky's Cossacks. 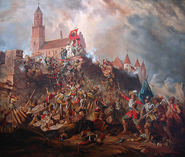 Nineteenth-century reimagining of the 1655 Siege of Jasna Góra.

"Charles X Gustav in skirmish with Tatars at the battle of Warsaw, July 29, 1656." Johan Philip Lemke, oil on canvas, 1684.
Community content is available under CC-BY-SA unless otherwise noted.
Advertisement