+4 vs Standard building
+4 vs Eagle Warrior

The Teutonic Knight is the unique unit of the Teutons in Age of Empires II. It is a slow, heavily armored infantry unit with a powerful attack.

The Teutonic Knight is the most powerful infantry unit in the game. Fully upgraded, they have 100 HP, 21 attack, 13 melee armor, and 6 pierce armor. They can defeat fully upgraded Paladins more effectively than fully upgraded Halberdiers, but the latter are still much more cost effective against cavalry.

Teutonic Knights are tough enough to beat almost every unranged unit in a one-on-one fight, but even with their high melee armor, high hit points, and powerful attack, they prove to be vulnerable to units such as the War Elephant, Battle Elephant, and the Cataphract, as well as double-teaming from infantry who have bonuses against them, such as Samurai or Jaguar Warriors, both of which can defeat the Teutonic Knight in mass battles. The Leitis deserves a separate mention here, since its attack ignores melee armor, which essentially puts the Teutonic Knight totally helpless and prone against them. The Obuch is also a major threat to them, as every Obuch's attack removes armor, so Obuchs can easily reduce the Teutonic Knights' major advantage and leave them prone to the attacks of other units. The Urumi Swordsman, with the charge attack, and the attack that can ignore armor with Wootz Steel, is another trouble to Teutonic Knights.

Their biggest disadvantage, however, is their extremely slow speed due to the large amount of armor they wear, giving them a disadvantage against ranged units, as almost all of them can hit-and-run them. Their slow speed also makes them weak against Monks. However, the Teutons' team bonus makes it harder for enemy Monks to convert their units.

Teutonic Knights pair well with Paladins since they have no trouble with archers at all. But probably the best partner for them are siege weapons. With their increased bulk due to Ironclad, they can support the Teutonic Knights against almost any kind of threat. Scorpions and Mangonels tackle archers, and Rams can provide shelter and distract enemy units. Also Bombard Cannons work well against longer-ranged enemy units. The biggest threat to that combination are siege weapons on the other side, especially other Bombard Cannons and long-ranged Onagers, because they hit the entire army very hard and can also hit approaching Teutonic Knights before being reached due to their slow speed.

As Teutonic Knights are unique to the Teutons, only technologies that are available to them are shown in the following table: 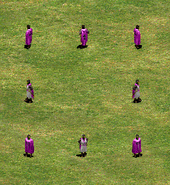 A group of Teutonic Knights

Their durable armor allows Teutonic Knights to win some fights even when greatly outnumbered.

Teutonic Knight in the HD Edition and Definitive Edition

Teutonic Knights vs. Gog and Magog by Heinrich von Hesler

An artist's depiction of a Teutonic Knight