Temple of the Gods

2000
The Temple of the Gods is a type of Temple, that appears in two scenarios in the Fall of the Trident campaign in Age of Mythology, as well as in one in The New Atlantis.

This Temple serves no in-game purpose, as it can neither be constructed, nor it can train myth units. In all scenarios it appears, it serves plot advancement, the quests involving these.

For example, in Mount Olympus, Kastor and his expedition, trapped in the mountain because of the Servant of Kronos' machinations, must ascend the homonymous mountain and destroy a Temple of the Gods to escape.

Eventually, the Atlanteans, most of them transformed into myth units, and Kastor ascend into the mountain, but before they can do anything to the Temple, an Earthquake destroys it, but they manage to escape.

A Temple of the Gods, when the player worships Kronos. 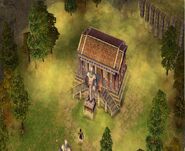 The Temple of the Gods that appears in Good Advice. 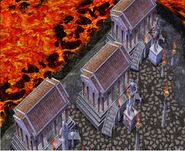 The trio of Temples featured in Strangers.
Add a photo to this gallery

Retrieved from "https://ageofempires.fandom.com/wiki/Temple_of_the_Gods?oldid=227640"
Community content is available under CC-BY-SA unless otherwise noted.