The Tekkousen (pronounced Tek-oo-sen) is a military naval vessel in Age of Empires III: The Asian Dynasties that is unique to the Japanese and can be trained at the Dock once the Fortress Age is reached. It is the Japanese counterpart to the European Frigate.

The Tekkousen has similar hit points and strength to a Frigate, making it highly effective against weaker units such as the Galleon or Atakabune.

With European Cannons, Tekkousen outranges normal Frigates while also proving to be a strong match even against highly upgraded ones.

Broadside Attack: Fires a volley of cannon shots at an enemy ship within attack range, with each shot doing 70 siege damage. 60 seconds cooldown.

As Tekkousen are unique to the Japanese, only technologies that they have access to are shown in the following table:

As Tekkousen are unique to the Japanese, only their cards and other civilizations' TEAM cards are shown in the following tables:

"The Korean kobukson (“turtle ship”) is often thought of as the first armored boat, a precursor to the American ironclads of the eighteenth century. However, the Japanese used armored ships in their feudal wars of the sixteenth century, as rival daimyo battled each other for land and sea supremacy. Daimyo Oda Nobunaga constructed six tekkousen (“iron armor ships”) for his personal navy. These boats were protected by 3-inch armor plating, and armed with multiple cannons and high caliber rifles. They were utilized during the invasion of Korea in 1592-1598." 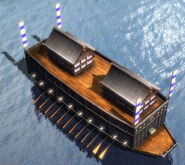 An in-game Tekkousen
Add a photo to this gallery
Retrieved from "https://ageofempires.fandom.com/wiki/Tekkousen?oldid=258852"
Community content is available under CC-BY-SA unless otherwise noted.