The Tashunke Prowler is a melee heavy cavalry in Age of Empires III: The WarChiefs that is unique to the Lakota and can be trained at the Corral once the Fortress Age is reached. It is a stealthy cavalry unit that become stronger in large groups.

The Tashunke Prowler is unique in that for every other Tashunke Prowlers in a radius of 20 around them, it gains +5% hit points and +10% attack, which is cumulative with each other. It is also the only cavalry unit that has stealth ability (except the Lakota War Chief with the "Center of Power" Home City Card).

Effective against artillery and Shock Infantry, Tashunke Prowlers deal Area of Effect damage and are effective when massed in later Ages, but are relatively weaker since they lack direct upgrades (for example, Champion) and have a train limit of 14.

As Tashunke Prowlers are unique to the Lakota, only technologies that they have access to are shown in the following table:

As Tashunke Prowlers are unique to to the Lakota, only their cards and other civilizations' TEAM cards are shown in the following tables: 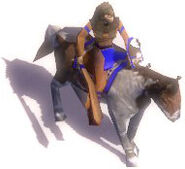