The Tarkan is the unique unit of the Huns in Age of Empires II: The Conquerors. It is a cavalry unit with high pierce armor and an attack bonus against buildings.

Tarkans can be upgraded to Elite Tarkans in the Imperial Age.

In combat, Tarkans are best categorized as medium cavalry, something of a middle-ground between Light Cavalry and Knights, considering their cost, hit points, armor, and attack. But the Tarkan's real specialty is destroying buildings, more of a mobile town destroyer rather than melee combat specialist like the Champion or the Paladin. As such Tarkans are effective against most ranged units, Light Cavalry, and buildings due to their high pierce armor and hit points. Tarkans should be used for quick raids and hit-and-runs on buildings/towns/forward camps. They are able to knock down defensive buildings with relative ease and are capable of dealing with archers in a counter-attack. Tarkans are also useful in home defense scenarios in which the opponent sends siege weapons en masse. Tarkans should therefore be utilized as raiders both offensively and defensively due to their penchant for hit-and-run attacks.

Tarkans come up short against infantry, heavy cavalry, and Camel Riders. Another subtle disadvantage they have is their rather slow Rate of Fire, which makes them one of the slowest attacking melee units in the game.

Since the Huns have Paladins, Tarkans should be used to fulfill their main role, which is to destroy buildings. However, due to having 1 more pierce armor with only 10 hit points less than the Paladin, they can be used against archer civilizations as well.

As Tarkans are unique to the Huns, only technologies that are available to them are shown in the following table: 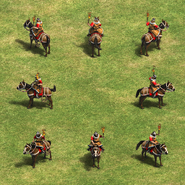 The Tarkan sprite in the Definitive Edition.

Reconstruction of an early 5th c. Hunnic warrior, based on archaeological finds in Volnikovka, Ukraine.

Tarkan in the HD Edition and Definitive Edition.