The Taj Mahal is a wonder in Age of Empires III: The Asian Dynasties that is unique to the Indians and can be built to advance into the next Age. It sends a shipment of coin when built and allows the use of Cease Fire to temporarily stop all fighting.

Cease Fire: Stops all units, friendly and enemy, from attacking for 20 seconds; defensive buildings are unaffected and can still attack, however. 450 seconds cooldown.

Similar to Hermes' god power in Age of Mythology, the Taj Mahal's Cease Fire is useful for positioning an army into place for attacks targeting a strategic location, or to stall an enemy offensive in time for a counterattack response.

The Taj Mahal is particularly useful for a Fast Fortress (FF) strategy due to the rather large amount of Coin received from the early Age up, and boost players to the amount of Coin needed to quickly reach the Fortress Age.

As the Taj Mahal is unique to the Indians, only technologies that they have access to are shown in the following table:

As the Taj Mahal is unique to the Indians, only their cards and other civilizations' TEAM cards are shown in the following tables:

"The Taj Mahal is a mausoleum located in Agra, India. The Emperor Shah Jahan commissioned it as a monument and tomb for his favorite wife, Mumtaz Mahal, after she died in childbirth. The most visually identifiable feature of the tomb, the massive tear-shaped marble dome that caps the structure, is evocative of the grief the emperor felt over the loss of his beloved.

The epitome of Mughal architecture, the Taj Mahal incorporates elements of many Asian cultures. The tomb combines the domed pavilions and eaves of Indian architecture, with the precise gardens and impressive waterworks of Persia. The towering minarets, found at the four corners of the structure, and the ornamental stonework exhibit Islamic motifs. Across the reflecting pool, the grounds contain a number of other smaller tombs, as well as a mosque.

The Taj Mahal’s construction spanning nearly twenty years, the Taj Mahal is adorned with priceless stone, metal, and gems, from all over India and Asia. Its cost was enormous. Soon after the Taj Mahal's completion, Shah Jahan’s son Aurangzeb imprisoned him. When Shah Jahan's died, he was buried in the Taj Mahal next to his wife, the only asymmetrical element in the tomb's otherwise perfect symmetry. Despite incidents of defacement and subsequent restorations during the British colonial period, the Taj Mahal remains a resilient monument to love."
—In-game history section 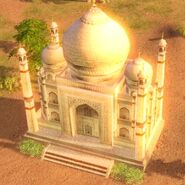 A photo of the real Taj Mahal
Add a photo to this gallery
Retrieved from "https://ageofempires.fandom.com/wiki/Taj_Mahal?oldid=285135"
Community content is available under CC-BY-SA unless otherwise noted.