2
The Sword Bearers are a unit that appears exclusively in the Egyptian part of the Fall of the Trident campaign in Age of Mythology.

Bring the sword bearers to the sleeping Guardian to awaken him.

The Sword Bearers are essentially two male Laborers that carry the sword of the Guardian. This sword was unearthed from an Excavation, featured in The Lost Relic.

The Sword Bearers themselves are featured in the Light Sleeper scenario, where the heroes must fight through followers of Set, who occupy the Guardian's city, in order to retrieve the sword to its rightful owner. They have to survive throughout the scenario (which shouldn't be an issue, as they are rather durable) and get to the sleeping Guardian to awaken him. 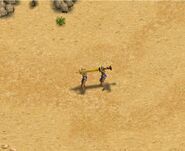 The Sword Bearers, as featured in Light Sleeper
Add a photo to this gallery
Retrieved from "https://ageofempires.fandom.com/wiki/Sword_Bearers?oldid=280138"
Community content is available under CC-BY-SA unless otherwise noted.