The Surgeon is a special unit in Age of Empires III that can be shipped from the Home City by European civilizations or trained at the Church by most European civilizations once the Master Surgeons Home City Card has been sent, and at the Meeting House by the United States. It fulfills a similar role to Priests, but can also build Field Hospitals.

Like other healers, Surgeons can heal friendly units at a rate of 10 HP per second and a range of 12, however, when enhanced with Home City Cards (see below), they are the best healers in the game.

Surgeons cannot destroy buildings since they have no siege attack.

British Manors can be upgraded with the Florence Nightingale card to provide healing to nearby units instead of having the Master Surgeons card.

The Spanish have Surgeons, however their Missionary is one of the fastest (if not the fastest) land units in the game. They also boosts the damage of nearby units if the Unction card is shipped.

Surgeons can be garrisoned in the same buildings as settlers. Town Centers consider a Surgeon the same as a settler for gaining and increasing attack. 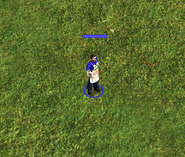 Surgeon portrait in the Age of Empires III beta
Community content is available under CC-BY-SA unless otherwise noted.
Advertisement