Sundjata is a campaign in Age of Empires II HD: The African Kingdoms, which follows on Sundiata Keita (ca. 1217 – 1255), the founder of the Mali Empire. Among his feats depicted in the campaign includes his efforts to unite the scattered kingdoms of Sub-Saharan Africa to oppose the warmongering Soumaoro Kanté of Sosso which culminates in the decisive Battle of Kirina and him becoming the first Mansa (emperor) of the Mali Empire, as told in the Epic of Sundiata.

4
Sundjata is a cavalry hero with the appearance of a Light Cavalry (in the Definitive Edition, he obtains an unique model). Throughout his entire campaign, he is a must-survive unit. As a hero, he cannot be converted and can regenerate health. He is also available in the Scenario Editor.

The Sundjata campaign consists of 5 scenarios. The player plays as the Malians, and the player color is purple.

The campaign is narrated by Bala Faséké Kouyaté, a griot who stole Soumaoro's magical balafon, Sosso Bala, prior to the Battle of Kirina, which he uses to inspire Sundiata's men to their eventual victory and kept ever since, as he tells the tale of the Epic of Sundiata to an outsider. 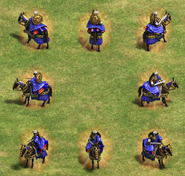 Sundjata in the Definitive Edition