Age of Empires Series Wiki
Register
Don't have an account?
Sign In
Advertisement
in: Age of Empires II, Infantry heroes, Rise of the Rajas

+2 vs Eagle Warrior
+1 vs Standard building

3
The Sunda Royal Fighter is an infantry hero in Age of Empires II HD: Rise of the Rajas.

For an infantry, it has high attack, armor, and health, as well as a high movement speed. As heroes, Sunda Royal Fighters cannot be converted and can regenerate health.

They appear in the Gajah Mada, Le Loi and Bayinnaung (named Toungoo Warriors in the latter) campaigns.

They notably appear in The Pasunda Bubat Tragedy, and belong to the Sunda princes, whom Gajah Mada wants to exterminate to cover the plot to subjugate the Sundanese from his king. They are (as their name suggests), the royal bodyguards of these princes, in Trowulan.

They are found scattered around the map in The Burmese Tigers, and can be converted to the player's side. They can also be found in The Mandalay Cobra, along with Canoes, Dragon Ships, and powered-up Monks. Later they appeared in The White Elephant.

Last but not least, they can be found on the Malay Pirates' island in The Dai Viet Uprising.

It also appears in the Pachacuti campaign, renamed Apo Mayta, who is the narrator and one of the generals serving Pachacuti. 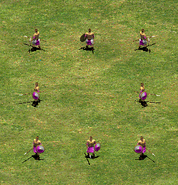 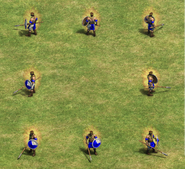