Suleiman I (1494-1566) better known as Suleiman the Magnificent was the sultan of the Ottoman Empire, reigning from 1520 until his death in 1566. He is named after the biblical King Solomon. Suleiman lived in Istanbul which was formerly the Byzantine city of Constantinople, not too long after Muslims converted it into their holy city. He had a strange dream that he thought was a sign that Allah wanted him to rebuild the gate so he ordered workers to build a new gate and it was decorated with lions to remind Suleiman of his dream. The gate still stands in Istanbul today and Suleiman is famous for being an excellent reformist leader, which is why his people called him Suleiman the Magnificent.

Suleiman is the AI personality of the Ottomans in Age of Empires III. He is voiced by Marcelo Tubert.

Suleiman generally focuses his villagers on building multiple towers in his town early in the game, to protect his buildings from small groups of invaders. Later in the game, he may also build mills and plantations.

Overall, Suleiman is quite weak as he generally takes longer to build up his forces than his counterpart AIs, plus his armies tend to be smaller. In skirmish mode, he mainly focuses on cavalry and artillery. Suleiman will utilize Janissaries and Abus Guns as well during the Colonial Age. Once he reaches the Fortress Age, he will usually focus on Hussars accompanied by groups of artillery and Grenadiers. This can pose a problem for high infantry armies, as he will usually upgrade his Abus Guns and Falconets in battle. Rarely, Suleiman may still utilize upgraded Janissaries in the late-game stages of the match.

If the The WarChiefs expansion is active, Suleiman may rely solely on mercenary heavy infantry or outlaws to comprise the infantry force in his army: it is not unusual to see Renegados, Highlanders and Spies as Suleiman's most-used unit in the post-game summary.

Suleiman as an Ally[]

Suleiman as an Enemy[] 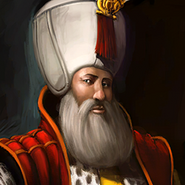