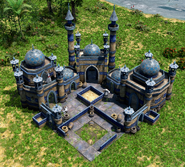 A Sufi settlement in the Definitive Edition

An actual Sufi Mosque; note the similarities with the one in the game
Community content is available under CC-BY-SA unless otherwise noted.
Advertisement