6
Subotai, also spelled Subutai (c. 1175 - 1248), was a Mongolian general and military strategist of Genghis Khan and later Ögedei Khan. He is considered one of the greatest military leaders of all time, having directed over 20 campaigns, won 65 pitched battles, conquered 32 nations, and taken more territory than any other commander in history.

In Age of Empires II, Subotai is represented by an unusually fast Heavy Cavalry Archer hero. He appears as a subordinate in the Genghis Khan campaign, an antagonist in the Kotyan Khan campaign, and the protagonist in the challenge scenario Mongol Raiders. He is also available in the Scenario Editor. Technologies that benefit cavalry archers also benefit Subotai, but he is not affected by some other bonuses. As a hero, he cannot be converted and can regenerate health (since The Conquerors). 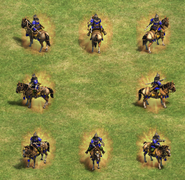 Subotai in the Definitive Edition