Blockhouse (in groups of 10)

The Strelet is a ranged gunpowder infantry in Age of Empires III that is unique to the Russians and can be trained in blocks of ten at the Blockhouse or individually at Fort and Galleon.

Strelets are the Russian meat-shield and anti-infantry unit. They are weak, but cheap infantry, making them useful for rushing opponents in the Commerce Age, however, the Strelets are weaker than other infantry units (they are the weakest and cheapest infantry). The player can get the original cost if Strelets are trained from Forts or Galleons. Strelets are cost-effective, and even more after using cards that upgrade them.

Strelets maintain effectiveness through all ages in the game when properly upgraded with the "Boyars" and "Strelet Combat" Home City Cards. They can be further upgraded at the Arsenal with Counter Infantry Rifling, and even further with the use of Advanced Arsenal. They combine well with Cavalry Archers, which are effective against both cavalry and artillery, essentially covering one another's weaknesses. Massing Strelets is easy, with both large shipments and batch training, and can be used to grind down an enemy's economy by sheer cost effectiveness.

Strelets are useful to outnumber enemies and take down heavy infantry. Strelets are also easy to mass, since each queue will train a group of 10 Strelets. It is advised to add the cards that upgrade the Strelets in the player's deck, though they still remain weak when compared to other light infantry. But once they are properly upgraded with all the cards, arsenal upgrades, and barracks upgrades, the player will end up with a very cost-effective anti-infantry unit (Skirmisher). Strelets are very good in team games, as civilizations that can boost Strelets (TEAM cards) will make them even more powerful. Strelets costs 53% less resources than Musketeers, which means a Musketeer essentially equals to two Strelets. Strelets, when buffed, deal 23 damage and have 3x multipliers to heavy infantry. Strelets are a good choice against nations that rely on gunpowder heavy infantry, but they are extremely susceptible to cavalry or artillery-based strategies/civilizations.

As Strelets are unique to the Russians, only technologies that they have access to are shown in the following table:

As Strelets are unique to the Russians, only their cards and other civilizations' TEAM cards are shown in the following tables: 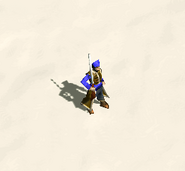 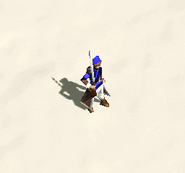