The Stradiot is mercenary heavy cavalry in Age of Empires III. It performs similarly to an improved Hussar, putting it in between the Mameluke and the Hackapell.

The Stradiot is the middle ground between the Mameluke and the Hackapell, in terms of both hit points and attack. Therefore, although having no attack bonuses, it is quite a powerful unit. They are effective in combat against artillery and light infantry. Being one of the fastest cavalry units in Age of Empires III, they can also be useful for raiding. However they are weak against heavy infantry, light cavalry, and, being mercenaries, Spies and Ninjas.

"The Stradiotto were originally the cavalry of Giorgio Castriota, an Albanian who was raised a hostage of the Ottoman court, which named him Iskander Bey. He escaped his captivity and led a rebellion against the Ottomans that expelled them from Albania. His forces, the remnants of which were the Stradiots, used guerilla tactics and the rugged Albanian terrain to repel the Ottoman Turks. The Stradiots were later employed as mercenaries by the Venetians in the sixteenth century.

These cavalrymen were unruly and could be counted on to break off from a fight to raid camps or supply trains. They wore turkish clothes, including baggy pants and shirts and turkish mail, but eschewed turbans for European helmets. They typically carried short spears called assegai that had points on both ends, but also used swords, maces, and crossbows." 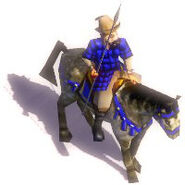 The Stradiot's Concept Art.
Add a photo to this gallery
Retrieved from "https://ageofempires.fandom.com/wiki/Stradiot?oldid=261998"
Community content is available under CC-BY-SA unless otherwise noted.