1
Stormy Dog is a non-interactive Gaia animal in Age of Empires II.

If the player enters the cheat code "WOOF WOOF", all birds on the map are replaced by flying Stormy Dogs, clothed in red capes. This has no effect on gameplay, and is only a visual change.

According to developer Matt Pritchard, Stormy Dog was named after an unwanted puppy that he rescued from a storm drain on January 15th, 1997. The cheat unit was coded in under four hours and the art was made by Duncan McKissick. The real Stormy Dog passed away in May 2008, at the age of 11.

Stormy Dog in The Age of Kings.

A photo of the real-life Stormy Dog. 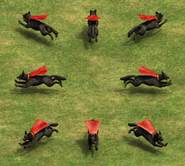 Stormy Dog in the Definitive Edition
Community content is available under CC-BY-SA unless otherwise noted.
Advertisement